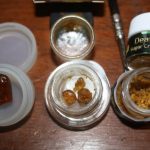 Welcome back to the Gourmet Hash series. We get to start this edition with the excitement of delivery day. Each order placed mostly contains products we have not tried before. Most of you might agree that trying new strains and experiencing the taste and effect is a joy all its own. This order contained Death Star Sugar Crumble, Walter White shatter, regular Kief, Pink Blueberry Kief Hash and some Comatose indica bud.

I was in the middle of giving each new item a good hello sniff when my eye caught sight of some of the items from the previous order and the bulb went off. Why not make a batch with more ingredients? This adventure being brand new, I had imagined using basic recipes while learning what the different combinations would bring. Yeah, that didn’t last.

Since caution had now been thrown to the wind, it was time to go Mad Scientist. Lining up all the available ingredients from the previous and new order, we went with 0.2 grams each of the following:  Death Star Sugar Crumble, Walter White shatter, Death Star Greenhouse pull-n-snap shatter and Hindu Kush live resin.

I gently heated the four ingredients until all were melted into a thick liquid and then thoroughly mixed them together. Once everything was well mixed, I slowly re-warmed the jar and the thick goo was allowed to settle on the bottom of the jar. I topped the contents with a little under 0.2 grams of Pink Blueberry kief, capped the jar and warmed it again for a couple of minutes. Once everything was up to temperature, I mixed everything together with the dab tool.  I stirred the mix and slowly added kief until the mix did not stick to fingers.

Once our batch could be worked by hand, I packed it into a tight chunk. From the picture, it looks still very shiny and sticky. Oh, and it looks tasty as hell. It also looked much greener than expected, considering none of the ingredients were that colour. Even the kief was a consistent tan colour, indicating the highest quality. While it was tempting to play with this new creation, however, it went in the jar to be better examined the next day.

Pondering what might come of this new creation, I spent some time giving each ingredient a good smell so the distinct aroma of each would be fresh in my mind when the new monster was unleashed. As unique and aromatic as each singular item was, it did not prepare me for what awaited when I opened the the jar. While trying to imagine what it smell like, it never occurred that it would be the most simple outcome possible. It smelled like what it was: Hash. Not just any hash, though. It smelled like that super-premium, old-school Afghani, black, sticky goodness of years ago. The scent was clean, bright and earthy, with a hint of floral. I was pleasantly surprised that something so new reminded me so much of the old school goodness.

While manipulating the solid chunk in my fingers, it started to come apart and crumble. That’s something that should be better controlled in future episodes when I add a kief press to the process.

Trying the new creation was a pleasure. It melted and liquified when heated, so adding more kief, pressing and heating the batch would give a more even burn. Going by the smell, the taste was no surprise, but was certainly no disappointment. It tasted like a brighter, somewhat flowery version of old-school black hash. The smoke was smooth and easy to inhale, which made enjoying the exhale very easy. Rich hash flavours left their trace behind for you to enjoy a second time.

The effect for a small amount was very cerebral and suggested a sativa like influence. This was quickly overpowered by heavy indica effects when more was consumed.  Couch lock and relaxed muscles became the most prominent effect, but did not overpower the cerebral effect enough to let you forget you were not going to be doing anything too complicated for the next couple of hours.

In this case, it meant that writing this article was not going to happen as planned that day. Remembering my name would have to be the hardest thing attempted while under the effects of this new monster. This super potent hash would need a name that befits its strength and character: Frankenstein’s Monster.