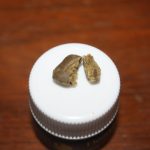 Welcome to the next installment of Gourmet Hash.

The recipe this time around is super simple and super rewarding. We used just two ingredients this time, Death Star Sugar Crumble and kief.

The kief we get from TrueMeds is very consistent, making a project such as this a little easier and our results more consistent. The kief has a nice bright aroma with a hint of floral and spice.

Death Star Sugar Crumble is a very enjoyable smoke on its own. Bright terpenes dominate the scent giving it an almost fuel-like smell. Like any fuel with high octane, it has some kick. It produces a very bright high as would a strong sativa, with a very energetic influence. It’s great for daytime use and getting stuff done.

Gentle warming of our crumble caused the wax-like appearance to give way to a thick brown semi transparent goo. Warming a bit more to just below the bubbling point made it thin enough to stir in the kief. The warm Sugar Crumble was very absorbent of the kief. I added additional kief twice to reduce the super sticky nature of the warm crumble.

It’s always fun to open the jar and experience the scent released by our newly cured batch. After opening the jar, a strong and very pleasant scent greeted my sinuses. The aroma was spicy and a touch earthy. The scent was somehow familiar, but I couldn’t quite put my finger on what it was.

This batch remained softer and more flexible than previous recipes and showed no tendency towards wanting to crumble. The colour lightened overnight to a medium brown and was more tan on the inside when broken open. It really appeared to be enjoyable to smoke!

Sample time was very enjoyable. The mix was still very melty and bubbled a fair amount. Once it started to combust, the hit was super strong with a flavour that was earthy, spicy and something I could not quite figure out. The high was a very pleasant balance of head and body high, which was a surprise since neither ingredient alone has such effects. Both are very sativa like. The body high was very hash-like and surely had to be a result of mixing the ingredients.

The only noticeable difference in the high compared to a good black hash was strength. The higher THC content of the Sugar Crumble naturally made for a very high-THC hash. Because of the high THC content, the effect was strong and lasting. This hash is a great companion for a soft seat, a big bowl of popcorn and a good movie or, perhaps, a relaxed evening of conversation with friends. This mix has been a great after dinner treat. Late into the evening, it would not be so suitable, as it would inhibit sleep.

I reached the end of the process for this edition of Gourmet Hash, but something was still gnawing at me: The scent. What was that familiar part? I spent a good 2 hours over a couple of days just sniffing this creation trying to identify it. I finally took the chunk to the Mrs to have her give it a sniff. It only took her about ten seconds to solve the mystery! “Pepper,” she announced. That was a very unexpected twist. The name “Death Pepper” came right behind the epiphany. How fitting.

I really love mixing terpenes. Thank you for joining us for another edition of Gourmet Hash. There is something special in the mix for the next episode so be sure to tune in.

Until then may you be blessed with Health, Healing and Herb

If you’re interested in creating your own hash, visit TrueMeds to purchase your ingredients:
Visit TrueMeds Now 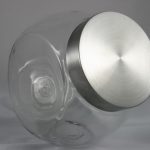 A recent discussion on the impending legalization in Canada fostered an interesting thought as I looked over and saw my cigar humidor: “Bud storage is about to take a major philosophy shift“.

For many years the common approach was to simply keep your stash out of sight. To that end, storage containers had that primary goal in mind. Other considerations were only secondary.  Yet for cigars, the options for keeping them in a perfect state for consumption have been around a very long time and include fixtures that look wonderful in any furnished room.

So, how do we make the transition from false bottom pop cans and hidden compartments to visible and good looking storage solutions? The market has begun getting a sense of this coming need and has started to provide solutions. Not many, but some. I fully expect that some of the most interesting ideas will first come from individual creations.

For a non concealed storage option, consider the wooden box humidor. They are available in different colors and sizes, so finding a match for your décor should not be a problem. Be sure to get one made specifically for weed use, as cigar humidors are made with Spanish cedar and those strong terpenes can affect weed flavour. There will be a need for non-concealed or furniture-style storage that does not fit the standard, cigar humidor image. Time will reveal just how that develops.

Concealed weed humidors come in a few different styles and shapes such as tool boxes or even a mini safe. Most humidors come with accessories such as a hygrometer to monitor humidity and some means of controlling humidity such as moisture absorbing materials that are specific to given moisture ranges. If a product you are considering does not have those essential features, you will need to purchase them separately. 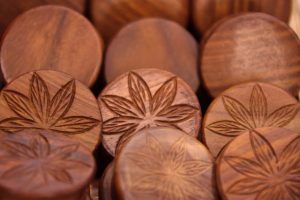 If you have a nice homemade stash box that looks good and serves to keep your buds at the perfect humidity for smoking and preserving flavour, please email some photos of them to us and we will highlight the best ones.