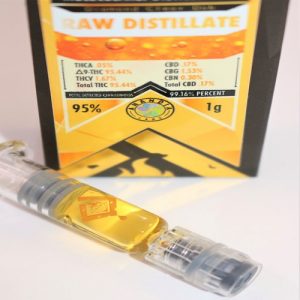 This review was an interesting experience for an old dog who matured long before the dab and shatter generation. The most potent product we ever saw in the ’70s and ’80s was Honey Oil. RAW may look a lot like the sweet, paper grease of old, but that is where the similarities end.

I have to admit, the passionate enthusiast in me really was excited to try this as soon as it arrived. Looking at the box label and seeing the 95% THC was almost unbelievable. I’ve sampled some of the best herb there is here and there over the years. Knowing that even a 30% THC bud is not carboxylated, you might think I would have had a better sense of how potent this product would be. The truth is, I underestimated its strength.

Getting a paper ready I set out to roll a nice old-school spliff. The almost solid at room temperature RAW took a little warming to allow it to squeeze out of the nice glass syringe, and a big old gob went on the paper. One thing that stands out is the lack of odour. There are no terpenes to provide aroma, so the unflavored RAW is almost fully devoid of scent.

Once rolled and lit, the almost complete lack of taste combines with a lack of smell to give the false impression of an inert oil being smoked. A medium-strength cough trigger and thick exhaled clouds were the first real indication this was far from inert. The second came after about the one third mark of the spliff as a clean, strong high began to set in. That’s usually a good indication to stop for a bit and see what the next few minutes bring.

On this day, I was not as conservative as I should have been and kept going until about the two thirds point before stopping. By that point, a very strong head high had set in, as well as a very strong body high with full couch lock mode engaged. The next little while was spent almost stunned by how high the RAW high was.

I would not recommend strong doses of RAW if you had stuff you needed to get done. The only thing I accomplished after 30 minutes was finding something to watch on Netflix. Thirty minutes after that, I was asleep.

After an hour-and-a-half weed nap, I was awake, but foggy and was still under strong couch-lock effects. The next day, there was a very real weed hangover for the entire day. The hangover was not so much uncomfortable as it was a day in slow motion.

RAW would be a great choice for many different ailments such as pain, insomnia, anxiety and depression. I strongly suggest, however, starting with very small amounts to truly gauge personal tolerance and required effect dosing.