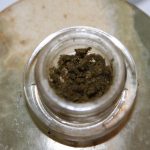 From the very start, the first “Gourmet Hash” session was a really fun experience. Browsing the dispensary selection alone took hours. With four kinds of kief and forty five types of shatter, wax and resins, live and regular on the menu, there are tens of thousands of combinations possible. If we play with the ratios of each ingredient we decide to use for a blend, we literally wind up with a near-infinite number of permutations of Gourmet Hash. Oh, the possibilities! Narrowing down our choices to just a few ingredients was tough, only made a little easier by the reality of having to work within budgetary constraints.

As this is very much a learning curve situation — and everything we are doing is, if not unique, quite new to us — we decided on a balanced mix of ingredients. I ordered  2 grams of Kief, 2 grams of OG Kush Kief, 1 gram Death Star Green house Pull&snap Shatter, 1 gram UK Cheese Green house Pull&snap Shatter and — saving the best for last — 1 gram of Hindu Kush Live Resin. The total cost of the order was a little less than $200.

After a few days to get everything individually sampled and evaluated, it was time to create the first batch. For this run, I chose the OG Kush kief and the UK Cheese shatter in large part because the UK Cheese is a hybrid. I hoped it would be Sativa-like and suitable for daytime use and periods of activity.

The tools and accessories I used were basic, as this was an unexpected offshoot of a bigger, ongoing project. As the series progresses, we will learn what the needs are, look at what the market has to offer and then obtain and review the best choice for a given task. We started this batch having a small torch; two metal dab tools; a glass, 1-gram wax jar for warming and mixing; and a marble container, which is used to hold and transfer heat to our glass jar.

Pull&snap shatter is soft at room temperature and is pretty sticky stuff. Hand rolling the shatter into little balls, as some shatter users do, is not possible with this shatter. Even when cooled, this shatter warms very quickly with hand contact and begins to stick. To counteract this tendency towards warming, I used a margarine container out of the freezer as a working surface to gently cut away the desired amount with a clean razor. The result was quite effective.

We started with close to one third of a gram of the shatter and placed it in our glass jar. The marble was heated until hot to the touch, but short of being too hot to touch. I then heated the jar by placing it on the hot marble and gently warming the jar with a low and small torch flame in a continuous circular motion. As the desired temperature is neared, it is good to stop and let the heat equalize. It takes a few seconds for the heat to transfer to the inner part of the glass.

Once the shatter was up to temperature, we added a bit less than a quarter gram of kief to the jar. We then placed a cap on the jar for thirty seconds to let the kief get up to temperature. This is where the marble shows its value. Because marble maintains its temperature well, we do not need to use the torch often.

When I took the cap off to give the blend a stir, the first hint of what this blend would smell like filled the air as the warmed kief added its colour to the scent palette. While taking a moment to enjoy the aroma, the realization of what was about to happen struck me: “You are taking these wonderful extracts on their own and mixing them together. This is planned madness”.

That hint of madness did not stop me from grabbing the dab tool and mixing the warmed ingredients together anyway. Should someone suggest I am crazy for doing this, just tell them, “He knew and he did it anyway”.

It was obvious almost right away this batch was mixing a little differently than the first batch did. This batch was a lot less sticky. Our first gourmet hash included a rosin and it absorbed the kief like a sponge. The shatter mix, when cooled, was a nice looking dark hash, but very crumbly. It could not be packed into a stable mass at all. The best option? Add more shatter.

I rewarmed the batch and added a small amount of warm shatter. This brought the amount of shatter in this mix up from 0.25 of a gram to 0.40 grams. This made the mix much more sticky warm and it packed together nicely. When cooled, it was again not as sticky, but it could now be pressed into a stable chunk. When trying to remove small amounts from the single piece, there was still a lot of crumbling. I decided to leave it in a crumble state, as working with it was easier.

While working with this batch and adjusting to the loose texture, it became clear that one of the first tools we need to add to the Gourmet Hash kitchen is a kief press. For the amounts we are working with right now, a small one will do. Since they are reasonably inexpensive, I should be able to order one fairly soon.

As with any great dish, the best part comes when served. After letting it sit for a day, it was ready. Well, even if it wasn’t ready, I was and was not waiting.

Opening the jar was a treat! The aroma blend that came about from this mix was pure magic. The UK Cheese shatter is mild and piney on the scent side and the OG Kush Kief is an earthy, piney blend that proudly reflects its Kush heritage.

What the final mix produced was nothing like either of the ingredients, which was very pleasant surprise indeed. Imagine the most pleasant, soft sandlewood fragrance with the barest hint of fruity melon. Sitting and just smelling it for ten minutes made it no less sensational. If there were a cologne with that fragrance, I would buy it.

Risking my elation to get an unbiased opinion, the wife was recruited to offer her thoughts on its scent. Immediately, she had a pleasant reaction. After taking a few really good whiffs, she told me if there were an incense with that scent, she would love it. I did not share my cologne thought; why risk walking away with less than a win?

Sampling this hash was just as enjoyable. The flavour was once again a unique blend, very much tasting as it smelled with a notable exception: an added earthy, old-school hash flavour. It was smooth and mild to smoke in conservative amounts. The effect was much as I’d hoped, with a mild yet present body buzz that was very relaxing and a cerebral head high that was very suitable for energetic or mentally engaging tasks. This was a strong high. It was clear that getting engulfed in a task for long periods and losing track of time was very possible with this very potent mix.

Coming out of the first planned Gourmet Hash making session, the results are exciting and encouraging. I had hoped to come up with something unique that exceeded the qualities of the separate ingredients. In this case it was a complete win! What came out of the proverbial oven was a half a gram of unique wonder that smells and tastes amazing along with a wonderful kick.

I am naming this creation: UK SandleKush.

I very much look forward to making the next batch.

Thank you for reading. Please, feel free to comment.

Until then may you be blessed with Health, Healing and Herb.